Lasco Distributors Limited (LASD), for the three months ended June 30, 2022, posted a 9% increase in revenue to $6.26 billion, up from $5.76 billion booked in the corresponding period in 2021. According to LASD, “ This was a result of growth in all Divisions: Consumer, Pharmaceutical and Exports, driven by rebalanced marketing investment to diversify the business and a focus on improving on-shelf availability.”

Cost of sales amounted to $5.18 billion, up 8% on the $4.79 billion reported in the prior comparable period. Nonetheless, gross profit recorded an 11% increase year over year, closing at $1.07 billion compared to the $964.19 million generated for the same period in the prior year.

Other operating income contracted by 66% to end the three months closing at $28.35 million relative to $82.53 million in the corresponding period last year. 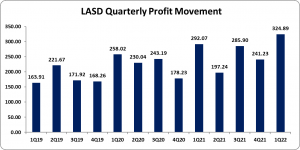