Lasco Manufacturing Limited (LASM) for the three months ended June 30, 2022 recorded an increase of 12% in total revenue to total $2.60 billion, relative to the $2.32 billion recorded for the comparable period in 2021.

LASM posted other loss of $13.75 million versus other income of $34.64 million reported for the prior corresponding quarter.

Operating expenses increased by 2% to close the period at $311.71 million versus $304.26 million booked for the corresponding period last year.

Finance costs for the first quarter sharply declined by 51% to $7.62 million compared to $15.60 million in the prior year’s comparable period. 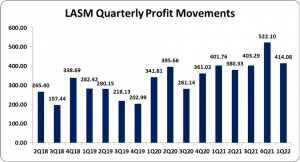