Cost of sales amounted to $3.81 billion, up 10% on the $3.47 billion reported in the prior comparable period. Consequently, gross profit recorded 4% increase year over year, closing at $896.24 million compared to the $864.70 million generated for the same period in the prior year.

Other operating income rose by 39% to end the three months closing at $73.14 million relative to $52.66 million in the corresponding period last year.

LASD stated that, “During the period, there was an increase in demand for our canned food product, flag ship brand- LASCO Food drink and pharmaceutical products. However, there has been a significant reduction in the sales of beverage products due to the closure of schools, hotels, and social gatherings.” 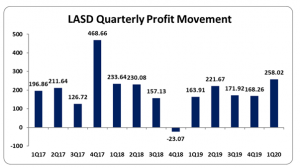