Lasco Manufacturing Limited (LASM) for the three months ended June 30, 2020 recorded an increase of 3% in total revenue to total $1.85 billion, relative to the $1.79 billion recorded for the comparable period in 2019.

Cost of sales amounted to $1.13 billion (2019: $1.12 billion) for the quarter, a marginal increase of 1% year on year. As a result, gross profit of $720.16 million was recorded for the period, 8% more than the $667.89 million booked for the quarter June 30, 2019. LASM noted that, “the increase in the gross margin is primarily attributable to on-going improvement in manufacturing efficiencies.”

LASM posted other loss of $2.32 million versus other income of $17.12 million reported for the prior corresponding quarter.

Operating expenses decreased 6% to close the period at $310.94 million versus $330.19 million booked for the corresponding period last year. Management mentioned that, “the positive out-turn for the quarter reflects gains from on-going improvements in operational efficiencies, reduction in structural costs and continued streamlining of the operations.”

Finance costs for the first quarter decreased 49% to $16.26 million compared to $32.06 million in the prior year’s comparable period. 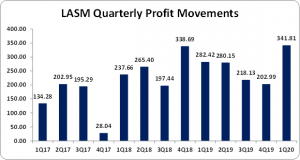