Operating expenses amounted to $1.65 billion, 35% more than the $1.22 billion reported the year prior. Of this:

LASF noted that, “the steady growth in our loan portfolio and customer base and the addition of our new remittance partner towards the end of the financial year impacted performance positively. We also take the opportunity to point out that given our earnings cycle, the larger portion of our annual revenues is derived in the first three quarters. During the 2018/2019 last quarter, compounding the weaker sales period, was the lower than normal Cambio revenues due to the rapid revaluation of the Jamaican Dollar, impacting our profits.” 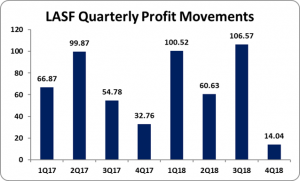