LASF recorded for the six months ended September 30, 2019, a total of $1.22 billion in Trading Income; this represented a growth of 12% relative to the $1.08 billion recorded for the comparable period in 2018. For the quarter, Trading Income closed at $630.06 million (2018: $558.14 million), a growth of 13% year over year. Other Income for the six months period amounted to $92.28 million compared to $57.02 million in 2018. Consequently, this resulted in an overall income of $1.31 billion for the six months, a growth of 15% compared to $1.14 billion in 2018. The Company stated, “this was driven by an increase in business from the Subsidiary, LASCO Microfinance Limited and Cambio trades in the parent business.”

LASF noted, “the year to date decline in profit was impacted by write offs and growth in staff expenses as we bolstered our capacity in collections, finance and administrative support to align with the growth and volume of the portfolio. The year to date loan portfolio of $2.0B net of write offs is a 40% increase in value and number of clients. Our loans subsidiary is now the leading revenue driver and is contributing 39% of total revenues which is in keeping with our strategic objectives of having a strong diversified revenue base.”

Additionally, LASF highlighted, “towards the end of the second quarter, LFSL entered the market with its first payment product, LASCOPay; a co-branded prepaid MasterCard. This new product, targeted primarily at the large remittance customer base and the general unbanked population is expected to lead LFSL into much anticipated strategic objective of Financial Inclusion for a large sector of Jamaicans who currently receive micro payments.” 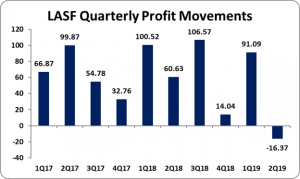