Other operating income climbed 25% during the period to total $68.19 million compared to $54.68 million last year.

Staff costs increased 21% to total $317.99 million for the period (2018: $263.08 million). The increase was, “due to increase in salaries for 2019 and cost associated with new staff hires required to support the expansion of current business.”

Property expenses climbed from $99.31 million for the nine months ended September 30, 2018 to $132.15 million during the period under review. The movement according to JSE was attributed to, “increase in maintenance costs and licences expense.”

Advertising and promotion marginally increased from $41.47 million to $93.52 million. This was largely due to, “planned increase in advertising , public relation and outreach activities being carried out by the Group. This is mainly in respect to the 50th Anniversary promotions.”

Securities commission fees posted a 46% increase for the period to close at $76.03 million (2018: $51.91 million), which according to JSE is, “in correlation to Cess Fees, therefore the higher the Cess Fees the higher will be this expense.”

As such, JSE reported a net profit of $409.12 million compared to a profit of $293.28 million reported for the prior year, a 39% increase. Net profit for the quarter amounted to $163.75 million (2018: $102.21 million). JSE noted the, “improvement in Net Profit continues to be positively impacted by increased market activities and impact of JSEG diversification strategies.”

JSE added, “The Third Quarter performance was excellent and the outlook for the remainder of the year is positive especially as it is expected there will be more companies listing their securities on the Exchange and other new product offerings. It is also anticipated that there will be a positive movement in Fee Income due to expected increase in the Group’s clientele and increase in the number of investors.” 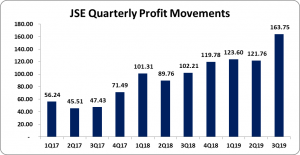