Operating expenses for the period under review closed at $335.32 million, 7% higher than $312.39 million booked twelve months earlier. Management noted that, “Despite being aggressively curtailed, general inflation affected our input costs such as staff cost, rent, fuel, and utilities relative to the previous year.”  Of this:-

MAILPAC noted, “Despite the performance anomalies created from the highs and lows of Covid, we reiterate confidence in our strategy of not building our business for short-term economic and social swings, but for long-term sustainable growth. We are confident that e-commerce will ultimately emerge as the primary form of non-grocery and household retail in the region, and Mailpac is best positioned to benefit from that trend as the leading provider in the region.” 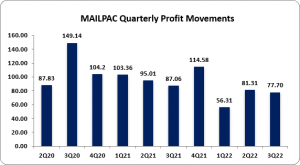