Main Events Entertainment Group  reported revenue of $457.69 million, 27% higher than the $361.41 million booked in 2018. Management attributed the performance to, “increased opportunities in our business.”

Total expenses amounted to $161.86 million for the period, a 28% increase when compared to the prior year. Of that, administrative and other expenses rose by 34%, moving from $97.30  million in 2018 to $130 million. Selling and promotions fell 23% to $5.96 million from $7.77 million reported in 2018. Depreciation rose 24% to total $25.91 million for the period (2018: $20.90 million). Management noted that the increase was due to general increases as well as an increase in the staff complement. MEEG also indicated, “lease, maintenance, utilities and security increased by a combined $6.50 million or 41%; which is consistent with increases in assets and operational space used in our business.”

Consequently, earnings per share (EPS) for the quarter amounted to $0.105 compared with $0.110 for the corresponding period of last year. The trailing twelve months earnings per share amounted to $0.31.  The numbers of shares used in the calculations are 300,005,000 units. Notably, MEEG stock price close the trading period on March 15, 2019 at $5.80

Assets totaled $926.92 million as at December 31, 2018 relative to $755.32 million a year prior. The decrease in total assets was largely due to a increase in ‘Property Plant and Equipment by $110.16 million to total $544.59 million (2017: $434.42 million). Management stated, “the company completed the build out of its M-Style facilities in the current quarter; and the build out of the operational space in western Jamaica is expected to be completed in the second quarter. The roll out of the M-Style show room will allow us to explore new concepts targeted to build even stronger market demand for our service experience.” 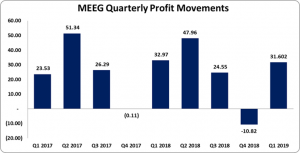