Main Events Entertainment Group, for the three months ended January 2020, reported revenues of $598.14 million, 31% higher than the $457.69 million booked in 2019. Management attributed the performance to, “strong growth in all areas of our business.”

Cost of Sales increased 25% to close at $325.46 million (2019: $260.57 million), This resulted in gross profit increasing by 38%, amounting to $272.68 million for the period relative to $197.12 million in 2019. The Company noted that, “during the quarter, we advanced our margin re-alignment project activities. We have made solid progress toward achieving the vison we have laid out for job efficiencies and process improvements.”

Total expenses amounted to $197.27 million (2019: $161.86 million) for the period under review, a 22% increase when compared to the prior year. Of that, administrative and other expenses rose by 24%, moving from $130 million in 2019 to $161.62 million. Selling and promotions fell 29% to $4.22 million from $5.96 million reported in 2019. Depreciation rose 21% to total $31.43 million for the period (2019: $25.91 million). Management noted that, “more material increases came from depreciation charges from the material capital investments in previous periods, salaries and related costs, transportation expenses and general office expenses. Cost savings were realized in legal and professional fees and advertising and promotions.”

Consequently, earnings per share (EPS) for the quarter amounted to $0.23 compared with $0.11 for the corresponding period of last year. The trailing twelve months earnings per share amounted to $0.45.  The numbers of shares used in the calculations are 300,005,000 units. Notably, MEEG stock price close the trading period on March 13, 2020 at $4.25. 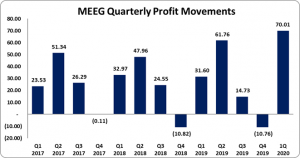