Main Event Entertainment Group Limited (MEEG) for the nine months ended July 31, 2019 recorded a total of $1.36 billion in revenue compared to $1.07 billion booked for the period ended July 31, 2018, a 28% increase year over year. Revenue for the quarter rose 29% to close the quarter at $468.61 million relative to $363.71 million booked for the corresponding period in 2018. Management noted, “ Revenue growth has maintained this year , driven by our sustained thrust to diversify the Company’s core income stream. The M style experience, our presence in the west and the M academy project have been material contributors to growth.”

Management indicated, “We have encountered cost control challenges this year. We have taken note of the increased prices in third party inputs  and increased incidents of inefficiency internally. We are actively reviewing our processes and logistics with the aim to improving efficiencies.”

MEEG recorded profit before taxation of $108.09 million, a growth of 2% when compared to last year’s corresponding period of $105.48 million. 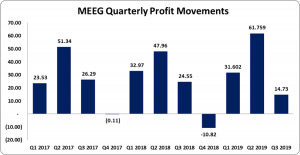