The inflation rate for the month December 2017 inched up to 0.6%, following an upward movement of 0.6% in November 2017, bringing the 2017 calendar year inflation rate to 5.2% according to The Statistical Institute of Jamaica (STATIN). The Consumer Price Index for the month rose from 247.3 in November 2017 to 248.7 for December 2017. This movement was attributed largely to the upward movement recorded in the index divisions ‘Food and Non-Alcoholic Beverages’ with a 0.8% growth, and ‘Housing Water, Electricity, Gas and Other Fuels’ with a 1.2% increase. No division recorded a decline for the month. Inflation within the Greater Kingston Metropolitan Area for December was 0.7% while Other Urban Centres and Rural Areas both reflected rates of 0.5%.

The index for the heaviest weighted division ‘Housing, Water, Electricity, Gas and Other Fuels’ advanced 1.2% as the division ‘Electricity, Gas and Other Fuels’ registered a growth of 2.5%. This increase was however tempered by a fall in the rates for water and sewage which contributed significantly to the group ‘Water Supply and Miscellaneous Services Related to the Dwelling’, declining by 1.4% for the period. The index for the other groups notably ‘Rentals for Housing’ rose by 0.3% while, ‘Maintenance and Repair of Dwellings’ moved upwards by 0.1%.

‘Furnishings, Household Equipment and Routine Household Maintenance’, ‘Clothing and Footwear’ and ‘Miscellaneous Goods and Services’ indexes all grew by 0.3% for December 2017. The increase in ‘Furnishings, Household Equipment and Routine Household Maintenance’ was as a result of ‘Household Appliances’ which recorded a 0.9% increase. The ‘Clothing and Footwear’ division  rose as a result of an increase in the group ‘Clothing’ (0.2%), whilst the main contributing factors to the increase in ‘Miscellaneous Goods and Services’ were higher cost for ‘Personal Care’ and ‘Personal Effects N.E.C.’

The index for ‘Alcoholic Beverages and Tobacco’ and ‘Restaurants and Accommodation Services’ inched up 1.0% mainly due to higher wine prices and meals consumed away from home respectively. ‘’ The ‘Health’ and ‘Recreation and Culture’ divisions both rose by 0.2% .The ‘Health’ division rose as a result of an increase in the group ‘Medical Products, Appliances and Equipment’ while ‘Recreation and Culture’ increased as a result of ‘Books and other school equipment, ‘Information Processing Equipment’ and ‘Stationery and Drawing materials.’ 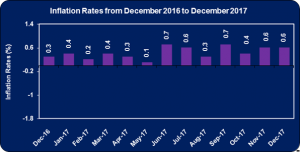