According to the Statistical Institute of Jamaica (STATIN) the consumer price index for August 2021 was 112.3 resulting in an inflation rate of 0.9% when compared to the previous month’s inflation rate of 1.5%. STATIN noted that, “This movement was primarily due to the 1.8% increase in the index for the heavily weighted ‘Food and Non-Alcoholic Beverages’ division. The index for the class ‘Vegetables, tubers, plantains, cooking bananas and pulses’ rose by 4.4% as prices continued to increase for some agricultural produce such as yam, tomato and sweet pepper.” Furthermore, “ The index for the ‘Housing, Water, Electricity, Gas and Other Fuels’ division increased by 0.3% during the review period, due mainly to an increase in electricity rates. This movement was however, moderated by a decline in water and sewage rates..”

The ‘Alcoholic Beverages, Tobacco and Narcotics’ division grew by 0.2% for August 2021, resulting from the 0.3% increase in the index for the group ‘Alcoholic Beverages’ attributable to higher prices for spirits, wines and beers. While the division for ‘Clothing and Footwear’ observed an increase of 0.6% in its index for August 2021. In the index, the group ‘Clothing’ and ‘Footwear’ rose by 0.7% and 0.5% respectively.

Inflation of 0.4% was recorded for the division ‘Furnishings, Household Equipment and Routine Household Maintenance’ primarily due to the 0.4% increase in the index for the group ‘Goods and Services for Routine Household Maintenance’ as a result of higher prices for some household non-durable items such as laundry soaps, detergents and other cleaning products. All of the other groups within this division registered increases.

The division for ‘Health’ recorded an increase of 0.3% in its index for August 2021. The main contributing factor to this upward movement was the 0.3% increase in the group ‘Medicines and Health Products’.  ‘Outpatient Care Services’ recorded a 0.6% uptick.

The ‘Recreation, Sport and Culture’ division registered a 0.6% rise for the period under review. Resulting from a 0.7% increase registered for the group, ‘Newspapers, Books and Stationery’. This upward movement resulted from higher prices for schoolbooks and stationery. 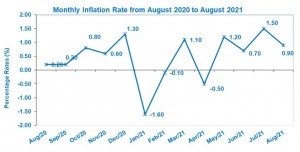