According to the Bank of Jamaica, the net currency issued to financial institutions (commercial banks, building societies and cambios) during the last 10 working days of December 2021 totaled $12 billion. It was noted that, “the issue for the period contributed to an overall growth of $22.5 billion or 11% in the currency stock for December 2021 relative to the previous month.” The growth was said to be “broadly in line with the Bank’s projection for growth of $23.1 billion or 11.3%.” However, in comparison to December 2020 growth rate of 12.8%, the rate of growth in currency issue for the month decreased by 1.8%. 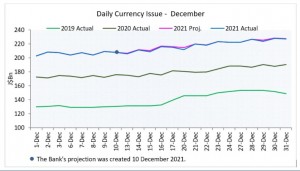 Furthermore as at 31 December 2021, the stock of currency was $226.9 billion (see Figure), representing a year growth of 19.1%, in comparison to a twelve months growth of 28% at end-December 2020. Notably, “when the estimated change in consumer prices is considered, the estimated real annual growth in currency for the period was 10.9%, compared to 21.6% for the corresponding period in 2020. This deceleration reflects a moderation in orders relative to 2020 when there was considerable uncertainty about the effect of the pandemic,” as per The Bank of Jamaica.