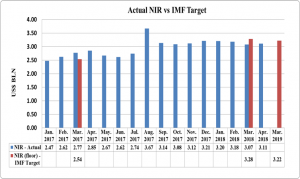 The country had surpassed the benchmark of US$2.54 billion outlined by the International Monetary Fund for March 2018. Under the New Agreement, the IMF noted, “Considerable progress has been achieved on macroeconomic policies and outcomes. Fiscal discipline anchored by the Fiscal Responsibility Law has been essential to reduce public debt and secure macroeconomic stability. Employment is at historic highs, inflation and the current account deficit are modest, international reserves are at a comfortable level, and external borrowing costs are at historical lows.”

All performance criteria for the period ended December 2017 were met. The IMF further noted, “Financial sector stability is a prerequisite for strong and sustained growth. Ongoing prudential and supervisory improvements will enhance systemic stability.” “Continued reform implementation will not only safeguard hard-won gains but also deliver stronger growth and job creation.” The Net International Reserve (NIR) target outlined as per the new agreement for the 2018/19 fiscal year is US$3.22 billion (see figure 2 above). As at April 2018, the Country is US$0.11 million below targeted amount.