tTech reports 50% increase in net profits for the first quarter

tTech Limited (tTech) for the three months ended March 31, 2018 reported operating revenues  of $69.82 million, a 23% increase when compared to $56.59 million recorded for the corresponding period last year. tTech highlighted, “Our consulting team closed on a major Portfolio and Project Management services contract and closed strategic IT planning services contracts with new costumers. In addition to new clients, we extended existing contracts. The increase in activity required us to add additional consultants to support the new business.” They also noted, “Our Managed IT services also grew in Q1 as two financial services firms and a global nonprofit organization outsourced the management of their internal IT infrastructures to us.”

Operating expenses increased by 7% to $46.24 million up from $43.33 million for March 2017. The growth was due primarily to, “support and maintenance cost of our new professional services automation (PSA) tools and additional subcontractors to help us execute the new consulting contracts.” Of total expenses, administrative expenses increased 8% to $39.98 million (2017: $37.06 million) whilst other operating expenses remained relatively flat at $6.26 million (2017: $6.27 million)

Consequently, Profit before Tax decreased by 50% from $4.50 million to $6.73 million. No Taxes were recorded for the period, thus Net Profit for the three months ended March 31, 2018 was reported at $6.73 million, an increase of 50% on the prior year’s corresponding period of $4.50 million.

Management indicated, “tTech has begun to reap the benefits of the marketing seeds that were sown throughout 2017 as all services and products increased uptake during the first quarter. The company also increased the size of its sales team to better manage the opportunities in the growing pipeline.” 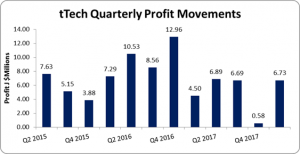