At its current value, the NIR is US$350.56 million less than its total of US$3,098.05 million reported at the end of September 2019. The current reserve is able to support approximately 53.56 weeks of goods imports and 36.28 weeks of goods and services imports. 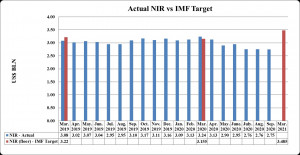 The country came in above the benchmark of US$3.155 billion outlined by the International Monetary Fund for March 2020, closing the fiscal year at US$3.24 billion, US$0.09 million above targeted amount. The Net International Reserve (NIR) target outlined as per the new agreement for the 2020/21 fiscal year is US$3.485 billion (see figure 2 above). As at September 2020, the Country is US$0.74 million below the targeted amount.
Governor of the Bank of Jamaica Richard Byles, at the annual Caribbean Economic Forum in June 2020 indicated that amidst the massive fallout occasioned by the COVID-19 pandemic, there is enough foreign reserves to fulfil Jamaica’s debt obligations. Byles said that among the raft of measures engaged in mitigating the effects of the pandemic such as the pumping of millions in liquidity into the market, the US$520 million in emergency funding accessed under the International Monetary Fund (IMF) rapid financing instrument (RFI) among others, have all helped to keep the economy going.