Total comprehensive income for the period amounted to $154.41 million compared to the $42.87 million for the corresponding period in 2017. 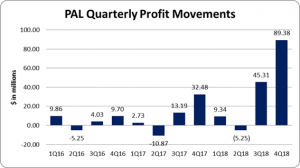