Profits attributable to stockholder’s of the Company amounted to $18.09 million for the period relative to $9.93 million in 2018, an 82% increase year over year. 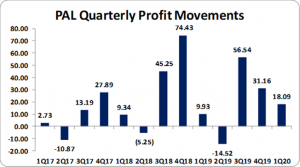