Kingston Properties Limited (KPREIT) for the nine months ended September 30, 2019, reported rental income of $168.08 million, 10% more than the $152.35 million reported for 2018. However, for the quarter, there was a 23% increase from $44.78 million in 2018 to $55.22 million in 2019. KPREIT mentioned that, “The improvement in rental revenue is attributed to the net addition to the property portfolio following the acquisition of the New Kingston property in October 2018.”

Operating expenses decreased by 3% to $97.98 million (2018: $101.29 million). For the quarter, operating expenses closed at $31.93 million versus $32.07 million in the prior corresponding quarter.  The Company stated that, “The reduction in operating expenses arose from lower year on year direct property expenses, such as HOA dues, property taxes and insurance costs attendant on the sale of the Florida condos.”

Net finance cost was $66.01 million for the nine months period compared with $29.79 million for the same period in 2018. Net finance cost for the quarter totalled $28.42 million (2018: $7.66 million). Management noted, “This included unrealized exchange losses on translation of foreign currency investments and borrowings amounting to $16.4 million and $29.1 million for the third quarter and the year to date period respectively. In 2018, the Group recorded net unrealized gains on translation of foreign currency investments and borrowings of $7.6 million in the third quarter of 2018 and $7.7 million for the first nine months of 2018. Translation gains or losses result from the impact the movement of the exchange rate has on our net foreign currency liabilities. Finance Income amounted to $2.4 million in the first three months of 2019 compared to $1.2 million for the corresponding period in 2018.”

Taxation of $3.97 million was booked compared to a tax credit of $30.44 million last year. This resulted in net profit for the period of $35.31 million compared to $10.36 million for the same period last year. For the quarter, the Company reported a net profit of $13.36 million relative to a net loss of $24.56 million in the previous comparable period.

KPREIT mentioned, “KPREIT will seek to raise approximately $2.0 billion in additional equity through a renounceable rights issue commencing November 18, 2019. The proceeds from this rights issue will go towards further expansion of the property portfolio with main focus on Jamaica and the Cayman Islands. This will also see investments in the facilities at both the New Kingston multi-storey office building and the multi-tenant warehouse complex on Spanish Town Road. The New Kingston property is slated to be tenanted by a firm in the ICT industry. A pre-approval has been granted for the property to obtain status under the Special Economic Zone (SEZ) regime.”

As at September 30, 2019, total assets amounted to $2.91 billion, $226.36 million more than the $2.68 billion booked as at September 30, 2018. The increase in assets was a result of an increase in ‘Investment Properties and ‘Receivables’ which closed at $2.70 billion (2018: $2.36 billion) and $57.85 million (2018: $56.17 million), respectively. KPREIT stated, “the net in investment properties results from the addition to the portfolio of the New Kingston building, as well as fair value improvement on some of our properties, less the disposal of ten (10) condos in Florida over the last year. Furthermore, the increase in total assets was primarily driven by the new property acquisition in November 2018.” 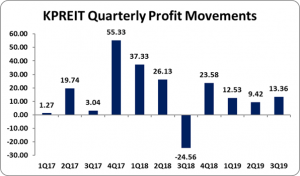