Sagicor Real Estate XFUND Limited (XFUND), for the nine months ended September 2019, reported total revenue of $4.76 billion relative to $7.44 billion reported in 2018, a 36% decline year over year. XFUND  stated, “This is as a result of the change in the business model, with the sale of the hotels last year where the discontinued operations contributed revenues of $2.7 billion and the gain on the sale of the hotels.”

Hotel revenue for the nine months period increased to $4.64 billion relative to $4.20 billion in 2018, an 11% improvement year over year. Net investment income closed the period at $17.55 million (2018: $20.09 million), while net capital gains on financial assets and liabilities amounted to $95.77 million relative to net capital gains of $148.12 million in the prior year.

Hotel revenue from discontinued operations amounted to $2.71 billion in 2018 relative nil in 2019.

ü  Expenses from discontinued operations totaled $2.04 billion for the nine months ended September 30, 2018 compared to nil in for te corresponding period in 2019.

Management highlighted that, “The prior year’s results include a onetime gain of $367 million stemming from the sale of the Jewel hotels. The current year numbers include a tax charge of $200 million on dividends repatriated from DoubleTree by Hilton (DoubleTree) to its immediate parent, X Fund Properties Limited. Also, Lower capital gains from Sigma Real Estate Fund units as most of the portfolio was liquidated in 2018 as part of the X Fund reorganization.”

XFUND stated, “Our direct and indirect investments in the hospitality sector have performed well for the period, and we remain focused on looking for opportunities to execute on the X Fund strategic intent to be the leading Real Estate Investment Fund (REIF) in the Caribbean.” 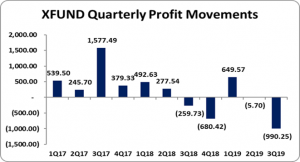