Productive Business Solutions Limited (PBS) for the six months ending June 30, 2019 reported an increase in revenues from US$82.01 million for the 2018 period to US$85.08 million in 2019, 4% increase. For the quarter, revenues increased 3% to total US$41.53 million relative to US$40.49 million the prior corresponding quarter.

Direct expenses increased 2% to close the period at US$47.47 million when compared to US$46.33 million for the same period of 2018. As such, gross profit for the six months rose 5% to US$37.61 million (2018: US$35.68 million). PBS noted that, “the increase was attributed to incremental revenue and lower direct expenses due to revenue mix.”

Finance costs climbed 13% to total US$3.82 million relative to US$3.38 million in 2018. Management stated, “this was primarily due to foreign exchange losses associated with the depreciation of the Jamaican dollar versus United States dollar in second quarter of 2018.” As such, profit before taxation amounted to US$1.22 million relative to a profit of US$920,000 in 2018.  For the quarter, profit before taxation closed at US$1.05 million (2018: US$690,000). 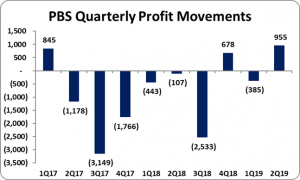