Direct expenses increased 3% to close the period at US$74.12 million when compared to US$71.93 million for the same period of 2018. As such, gross profit for the nine months rose by 8% to US$58.08 million (2018: US$53.55 million). PBS noted, “the increase was attributed to incremental revenue and lower direct expenses due to the revenue mix.” 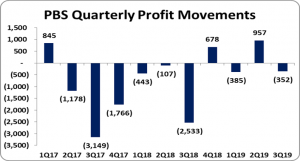