Sterling Investments Limited (SIL) reported a 5% growth in total revenue to $140.94 million compared to $133.89 million recorded for the corresponding period in 2018.

The Company noted, “Net Interest income totalled J$61.6 million for the nine months ended September 2019; 12.4% higher than the $54.8 million recorded for the corresponding period in 2018. The company has successfully taken advantage of intermittent market selloffs to purchase undervalued, high quality securities. The company has also effectively used low cost funding to purchase high yielding assets, thereby increasing the return to its investors. This is reflected in the company’s robust net interest margin of 86.2%. At 71%, the company maintains one of the highest net profit margins on the stock exchange due to its efficient corporate and organizational structure.”

SIL highlighted that, “expenses grew due to increases in the charges associated with the purchases of local equities, audit fees and management fees.”

Preference dividend expense for the nine months amounted to $5.34 million compared to $18.29 million recorded in 2018.

Total comprehensive income for the nine months amounted to $199.29 million compared to $95.66 million booked for the similar period of 2018.

Sterling noted, “SIL’s portfolio has benefited from the rise in global asset prices (in USD terms).  Prices of the assets in SIL’s portfolio have increased considerably since the start of 2019. The manager has strategically positioned the portfolio to take advantage of changes in the economic cycle.  The portfolio has generated attractive capital gains and income levels. The portfolio has also benefitted from a series of opportunistic equity investments on the Jamaica Stock Exchange. The team continues to look for profitable fixed income or equity opportunities in the global and local markets.” 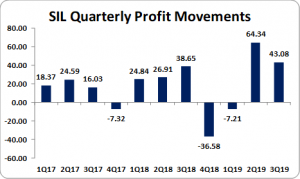