Finance costs decreased to total US$7.85 million relative to US$9.15 million in 2018. Management noted that this was, “primarily due to the refinancing of our bond”. As such, profit before taxation amounted to US$4.54 million, 74% increase on US$2.61 million reported in 2018.

After taxation of US$2.18 million (2018: US$2.48 million) the company reported a net profit of US$2.36 million, an increase from US$134,000 in 2018. Net profit for the quarter amounted to US$2.28 million, a 54% increase on the US$1.48 million reported in the corresponding quarter of 2018. Total Comprehensive income for the period attributable to shareholders was US$2.49 million relative to the loss of US$2.32 million reported the prior year. Management noted, “Profitability increased significantly year over year driven by margin improvements as a result  of increased sales of higher end service oriented products”.

Management noted that, “In 2020 we look forward to building on our base of high-quality recurring revenues by executing on several new projects across our printing, information technology, professional services, networking and advanced services business lines”. 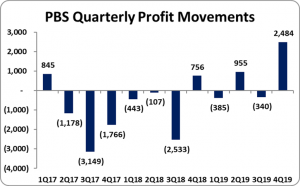