Operating expenses amounted to $1.33 billion for the nine months ended September 30, 2021 (2020: $1.24 billion), 7% more than its total a year prior, as “as the Company reinstated typical administrative expenditure in line with the measured return to normalcy,” according to the Company. Operating expenses for the quarter increased at 11% to close at $458.02 million (2020: $414.25 million).

“Looking ahead, we expect moderate uncertainty to continue. However, we are moving forward with our development plans in for the ROK Hotel & Residences in Downtown Kingston and remain committed to making additional investments in attractive, well-managed local and regional businesses,” as per Management. 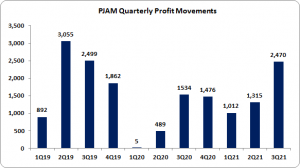