Interest from loans and receivables amounted to US$175,283 a decrease of 30% year over, while the company reported dividend income of US$435,612 compared to US$350,399 reported last year. 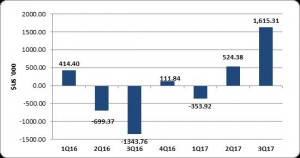