Preparations on for Wigton Windfarm IPO next month 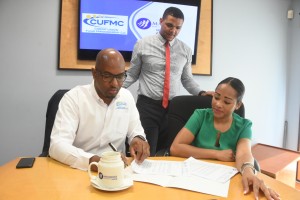 There is a great deal of planning going into next month’s Wigton Wind Farm’s IPO (initial public offering).

The IPO’s main broker, Mayberry Investments Limited, has already invited all brokers in Jamaica to participate in the IPO by becoming selling agents to the public.

So far several major local brokers have already been lined up for the IPO, including– Scotia Investments, Proven Wealth, the Credit Union Fund Management Company and the Edwin McKie/Derrick McKoy-led MVL Stockbrokers Ltd.

Director of investment Banking at Mayberry, Tania Waldron-Gooden had disclosed earlier that the move to invite all brokers to become selling agents for the IPO was driven by the mandate outlined by the Government to share benefits from government divestments with all Jamaicans.

In keeping with this mandate, the team, including representatives from the Development Bank of Jamaica, the Petroleum Corporation of Jamaica and Mayberry Investments have embarked upon a national effort to attract a wide cross section of the public to take advantage of the opportunity to gain ownership in Wigton.

Mayberry’s CEO, Gary Peart, told The Jamaica Observer on Friday that the IPO will be completed next month.

“It will definitely happen before the end of April, and in the meantime we are engaging as many brokers to ensure that the distribution of the shares will be as wide as possible,” Peart stated.

In fact, he informed Sunday Finance, some 200 outlets for sale of the shares have already been identified, and more are likely to join the list before the opening date.

Between 50 and 100 agents would normally be involved in similar IPOs, but there is evidently something special about the Wigton Windfarm IPO.

“The Wigton IPO is a national effort which will require all hands on deck, and it is a great IPO for the average Jamaican to become involved in,” Peart explained.

Minister of Finance and Planning Dr Nigel Clarke was also enthusiastic about the event taking place in another few weeks, when asked about the timing, following his post-budget press briefing at his ministry, Heroes Circle, on Friday.

“It will be any time now,” Dr Clarke responded, noting that Mayberry is finalising the detailed arrangements for the event.

Dr Clarke announced government’s plans for divesting the wind energy project based in the hills of Manchester, other government-owned projects and properties including the Coffee Industry Board, and government-owned lands at Silver Sands in Trelawny, at a Rotary luncheon in Kingston late last year.

According to him, since the Jamaica Stock Exchange has signalled to the world that the local market is the best investment in the world for the past five years, the government has taken note that only 16 per cent of working Jamaicans were enjoying the fruits of these investments, and wanted to see those numbers expand greatly over the next few years.

“You can work in the public or private sector and own a piece of the economy of Jamaica…There is no better investment in the world over the last five years than investing in the real economy of Jamaica,” Clarke noted.

He pointed out that the Wigton privatisation would be a “bottom-up” distribution, to ensure that all who apply for a minimum number of shares are successful, before those applying for a little more.

“And that won’t be the last, there will be others that will follow. and we want to ensure that everybody has an opportunity, because this government believes in economic opportunity for all,” he added.

In his New Year’s message this year, Prime Minister Andrew Holness noted that the Government will be packaging and bringing to market several public sector assets for sale on the Jamaica Stock Exchange — the first of which would be Wigton.

He explained that this is in keeping with government’s policy of creating an ownership economy — giving average Jamaicans the opportunity to own shares in some of Jamaica’s profitable public enterprises.

An IPO is an initial public offering, or the first sale of stock by a privately owned company to the public. IPOs are often issued by companies seeking the capital to expand, but in this case the government is divesting the company, for which it has 100 per cent ownership, in public hands.

Preparations on for Wigton Windfarm IPO next month_OBSERVER