Production in construction rose by 0.7% in euro area and 1.1% in EU28 for November 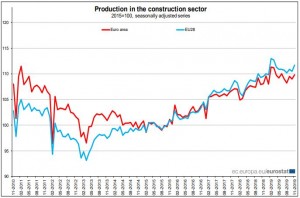