Production in Construction up by 0.2% in the Euro Area

Production in Construction up By 0.2% in the Euro Area

Countries with the highest increases in construction production included: Hungary (28.3%), Poland (24.2%) and the Czech Republic (8.9%). On the other hand, the only decrease was observed in Bulgaria (-2.9%). 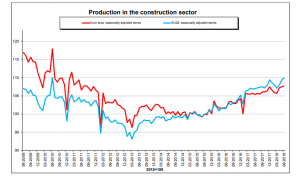