Pulse Investments Limited (PULS), for the three months ended September 30, 2019 reported operating revenue which increased by $20.21 million to $149.27 million in the first quarter relative to $129.06 million the prior year, representing a 16% increase.

Fair value appreciation on investment property climbed to $145.41 million compared to the $43.98 million recorded for the prior year’s corresponding period, a 231% uptick.

Consequently, profit before net finance costs improved 104% to $244.35 million up from $120.02 million for the comparable period in the prior year. 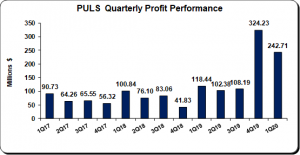