Finance costs increased by 167% to close at $6.76 million versus $2.53 million twelve months earlier. 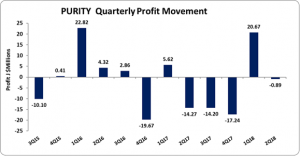