No taxes were incurred for the period under review, resulting in a net loss of $7.02 million versus a profit of $5.24 million last year. For the third quarter, the Company booked a net loss of $2.61 million in contrast to a loss of $2.64 million for the corresponding quarter in 2020. 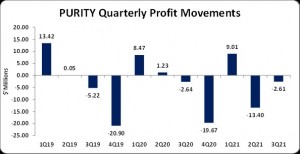