As such, profit before taxation for the nine months closed at $442.65 million relative to a loss before taxation of $539.71 million booked for the comparable period last year. For the quarter, QWI posted profit before taxation of $214.36 million (2020: $115.94 million). QWI noted that, “QWI’s Jamaican portfolio produced $336 million of unrealised gains in the year to date. Gains of $66 million were realised in the USA. The total investment gain for the year to date was $476 million, which represents almost a $1 billion turnaround from the $521 million of net losses in the year ago period.”

As at June 30, 2021, total assets closed at $2.28 billion (2020: $1.49 billion), a 52% increase. Of this increase, quoted investments (local) grew by 47% closing at $1.66 billion (2020: $1.13 billion). In addition, quoted investments (overseas) contributed to the increase amounting to $602.70 million (2020: $265.30 million). Management noted that, “At the end of the quarter, the Company held in excess of US$3 million in equities listed in the USA and Trinidad and Tobago. The portfolio includes positions in several leading information technology and life science companies, retailers, aerospace and service companies. Investments in local and overseas stocks amounted to $2.26 billion, with 73 percent of Jamaican listed stocks and the majority of the balance invested in the US market. The Company utilises borrowed funds in its investment activities which amounted to $407 million compared with $195 million in September 2020.” 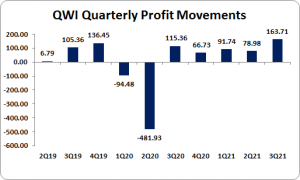