RJRGLEANER Communications Group (RJR) revenues for the nine months ended December 31, 2020, decreased by 13% to $3.79 billion compared to $4.34 billion for the comparable period the prior year. For the quarter, revenues decreased 6% to close at $1.49 billion (2019: $1.59 billion). The company noted, “the Audio-Visual segments reported increased revenues of $46 million or 5%, while the print segment which was most heavily impacted by the effects on business of the COVID-19 pandemic, reported a decline in revenues of $145 million or 20%.”

Additionally, Management indicated, “the impact of the pandemic on business saw advertisers reduce spending in almost every category of the business and with events being cancelled or indefinitely postponed, Group revenues were negatively impacted.” The revenue decline was partly offset by a number of initiatives, including online and broadcast education programmes and a series of virtual parties executed on our audio-visual and online platforms.”

The Company reported a 1% increase in total operating expenses to $2.35 billion when compared to $2.32 million posted in the same period in 2019. This was mainly attributed to a 13% increase in the company’s administration expenses from $926.82 million in 2019 to $1.05 billion, “due mainly to an increase bad debt provisions, and increased sanitation and safety protocols implemented in response to the ongoing pandemic.” as per RJR.

Furthermore, in efforts to reduce expense RJR noted, “during the quarter, the Group maintained its aggressive cost reduction measures, including layoffs and redundancies, and the suspensions of some services, all in an effort to mitigate the reduction in revenues experienced. Safety protocols were also strengthened and maintained at a considerably higher cost in order to safeguard the wellbeing of our staff members and customers.”

RJR noted, “the Group complete two significant investments during the quarter, which saw us increasing to 50% our interest in Jamaica Holdings LLC, operator of the Gustazos ecommerce platform which allows merchants to promote products and experience at very attractive discounted rates. The Group also signed an agreement to acquire a 10% stake in ePost Caribbean Limited, which offers a digital marketing toolset to include a newsletter platform, social media campaigns, online surveys, landing pages for online ads, ecommerce pages for small businesses and digital printing services.” 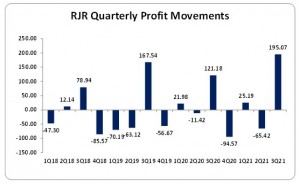