Seprod Limited (SEP), for the six months ended June 30, 2018, generated revenue of $10.44 billion compared to the $8.37 billion recorded for the same period of the prior financial year; this represents a 25% increase year over year.  The manufacturing division, recorded a 32% growth to close at $9.92 billion. While, the distribution division recorded a 6% decline to close at $3.47 (2017: $3.69). For the quarter, revenue climbed 33% to total $5.48 billion relative to the $4.11 billion reported the prior year’s corresponding quarter.

SEP noted, “The 2018 results are bolstered by the transfer of the former Jamaican dairy operations of Nestle within the Group effective 1 January 2018. These operations, located in Bog Walk, St. Catherine, produce the Supligen and Betty products, as well as co-manufacture products for international customers. In 2017, these operations were operated by Seprod under a management services contract and were not included in the Group’s results.”

Management reported that, “the Group would have had much better results had it not been for the J$220 million loss in the sugar operation for the period. Management has exhausted almost all options to make these operations achieve even a breakeven status and we are committed to, in very short order, eliminating these nine years of erosion in shareholders’ value.”

Management further added, “The major focus for the remainder of the year will be to improve employee engagement, to maximize synergies in the dairy operations and to complete the acquisition of Facey Consumer division.” 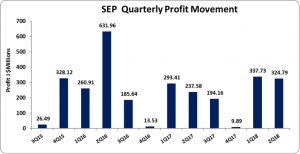