Total Other Revenue increased by 16% to $7.49 billion (2016: $6.46 billion) with SGJ highlighting that, “the positive movement was achieved through increased loan and transaction volumes across our business lines.” See breakdown below:

The CEO noted, “we have been executing well on our strategy, to grow our revenues’ streams and taking the necessary actions to reduce our structural operating costs, which has translated into the 355 bps improvement in our productivity ratio and positive operating leverage of 6.8%.”

Profit Attributable to Shareholders amounted to $5.60 billion, 15% more than the total of $4.88 billion a year earlier.

As at April 30, 2017, the company’s assets totaled $491.05 billion, 9% more than its value a year earlier. The increase in total assets was primarily driven by increases in Cash Resources by $26.77 billion to a total of $115.57 billion due to, “increased liquidity from inflows of retail and commercial deposits.” Management further noted, “we continued to maintain adequate liquidity levels to enable us to respond effectively to changes in cash flow requirements.” Investment Securities also contributed to the increase in the asset base with a $10.05 billion improvement year over year to $124.20 billion. 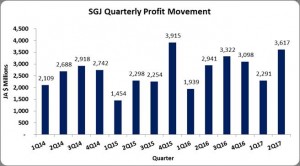