Foreign exchange gain amounted to $28.84 million compared to the gain of $38.40 million booked the prior year’s quarter. Management noted, “The Jamaican dollar depreciated against the US dollar by J$2.57 or 2% for the six-month period ended June 2019, relative to the same period in 2018 when it depreciated by J$5.40 or 4.30%. This led to unrealized foreign exchange gains for the six months ended June 2019.”

The Company booked a ‘Net gain on sale of debt investment securities at FVOCI’ for the period of $1.84 relative to a loss of $1.19 million recorded for the prior year. Net gain/(loss) on sale of equity investment securities at FVTPL of $954,540 was booked for the first six month of 2018 compared to nil in 2019. Total income for the six month period amounted to $76.78 million relative to $79.82 million for the same period in 2018. Total income for the quarter closed at $75.11 million versus $48.04 million booked for the same quarter of 2018.

Interest expenses for the six month experienced a 37% growth which closed at $6.59 million versus $4.80 million for the first six months of 2018.

Unrealised fair value gain on equity investments securities at FVTPL amounted to $6.46 million in contrast to a loss of $1.99 million  for the corresponding period in 2018. Total operating expense for the six months rose 7% to close at $19.23 million relative to $17.98 million for the same period in 2018. SIL noted, “This was the result of higher audit, listing, and management fees. The company still maintains one of the highest net profit margins on the stock exchange due to its efficient corporate and organizational structure.” Expenses however fell 6% for the second quarter to $10.65 million from $11.30 million incurred for the same quarter of 2018.

Total comprehensive income for the quarter amounted to $131.14 million compared to the income of $51.55 million booked for 2018.

Management noted our, “portfolio has benefited from the rise in global asset prices (in USD terms). Prices of the assets in SIL’s portfolio have risen considerably since the start of 2019. The manager has strategically positioned the portfolio to withstand potential changes in the economic cycle. The portfolio has generated attractive capital gains and income levels. The portfolio has also benefitted from a series of opportunistic equity investments on the Jamaica Stock Exchange. The team continues to look for profitable fixed income or equity opportunities in the global and local markets.”

As at June 30, 2019, the company’s assets totalled $1.49 billion, 20% more than $1.25 million a year ago. This resulted mainly from an increase in ‘Investment Securities’ which closed at $1.45 billion, 20% higher than the $1.20 billion booked as at June 20, 2018.  SIL indicated that, “This was mainly funded by the proceeds of the rights issue held in January 2019. As at June 2019, margin loans totalled J$305.1 million and represented 21.1% of the total portfolio of investment securities compared to 28.8% for June 2018. The modest use of leverage enhances shareholder returns above the net weighted average yield of the underlying portfolio.” 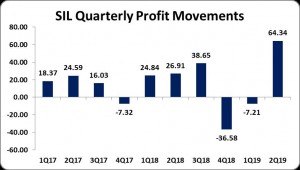