Sterling Investments Limited (SIL) reported a 9% growth in total revenue to $184.94 million compared to $170.31 million recorded for the corresponding period in 2020. SIL noted, “This was driven primarily by increases in interest income and gains on sale of debt investment securities, the latter a result of increased profit taking in the portfolio.”  Revenue for the third quarter fell 41% to $23.14 million compared to $38.99 million reported for the third quarter of 2020. Of total revenue:

Preference dividend expense for the nine months amounted to $8.80 million compared to $12.80 million recorded in 2020. 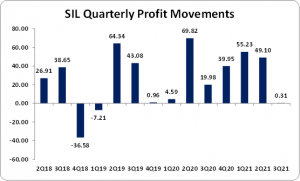