For the nine months ended September 30, 2018, Sterling Investments Limited (SIL) reported a 44% growth in total revenue to $138.89 million compared to $93.24 million recorded for the corresponding period in 2017. Management noted, “The company has successfully taken advantage of intermittent market selloffs and higher interest rates in the U.S. to purchase undervalued, high quality securities. The company has also effectively used low cost funding to purchase high yielding assets, thereby increasing the return to its investors. This is reflected in the company’s robust net interest margin of 87.6%. The company remains one of the most profitable on the stock exchange.”  Revenue for the second quarter rose 80% to $56.05 million compared to $31.14 million reported for the third quarter of 2017. Of total revenue:

Loss on disposal of available for sale securities for the period amounted to $339,777 relative to a gain of $23.23 million twelve months earlier.

Unrealised loss on quoted equities for the period amounted to $1.93 million (2017: Nil).

Foreign exchange gain amounted to $73.54 million, a gross increase of 542% compared to the gain of $11.46 million booked the prior year’s period.

Preference dividend expense for the nine months amounted to $18.28 million compared to $8.30 million recorded in 2017.

Total comprehensive income for the nine months amounted to $95.66 million compared to $88.26 million booked for the similar period of 2017.

As at September 30, 2018, the company’s assets totalled $1.27 billion, 4% more than $1.23 billion a year ago. This resulted mainly from an increase in ‘Investment Securities’ which closed at $1.23 billion, 3% higher than the $1.19 million booked as at  September 30, 2017.  SIL indicated that, “This was funded by a combination of an increase in the use of margin as well as inflows from the Dividend Reinvestment Programme (DRIP) and Complementary Share Purchase Programme (CSPP). SIL was the first company to introduce these programs on the Jamaica Stock Exchange.” 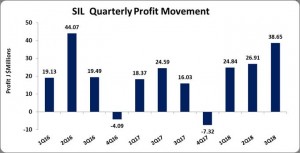