SJ noted that the increase in expenses was due to,“higher Actuarial Liabilities emanating mainly from growth of the inforce Insurance business and lower interest rates. Increased policy beneﬁts, including death claims, health claims, annuity payments, surrenders and withdrawals from segregated policy funds, as portfolios grew. P&C claims for last quarter 2019 relating to AGI are also included in Net Beneﬁts costs. Also consolidated administration expenses, including depreciation and amortization of software, of $22.63 billion was 20% higher than in 2018. Excluding the effect of acquisitions and consolidation of X-Fund, the increase was 12%. Despite this, we maintained the Group efﬁciency ratio of administration expenses to total revenue, a key measure of expense management, at 31% as it was in 2018.”

Share of profit from joint venture amounted to $14.62 million relative to a share of profit of $18 million booked a year earlier. Share of loss from associate for the period totalled $98.66 million compared to a loss of $80.54 million last year. The Company reported ‘Gain on step acquisition of Sagicor X Fund’ of $1.52 billion in 2018, compared to nil for the same period in 2019.

Net profit attributable to shareholders for the period amounted to $15.65 billion relative to $14.23 billion the prior year’s period. For the quarter, net profit attributable to shareholders reduced 11% to $4.79 billion (2018: $5.41 billion). SJ noted that, “The Q4 2018 results included a significant “one-time” gain of $1.52 billion on consolidation of X-Fund. In addition, 2019 results include higher losses from Playa Hotel & Resorts (Playa), an associated company.”

The Group mentioned that, “In addition to strong generic growth across our major business lines, we expanded our investment in Property and Casualty Insurance with the acquisition of a 60% interest in Advantage General Insurance company Limited (AGI). Our 2019 operations also include activities for a full year relating to the Sagicor X-Fund Group (“X-Fund”) of which we took effective control and consolidated into SGJ from the 4th quarter of 2018 and TravelCash Jamaica Limited (TravelCash) which was acquired effective December 1, 2018.” 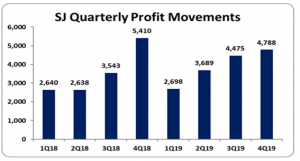