Sweet River Abattoir & Supplies Company Limited (SRA), For the six months ended September 30, 2018 recorded a 19% decline in revenue to $134.58 million relative to $165.45 million in the same period in 2017. Revenue for the quarter went down 22% to close at $57.52 million relative to $73.70 million. SRA indicated, “this decrease was due to the company’s inability to procure pigs from farmers based on its indebtedness to compare to the previous period of two thousand four hundred and two pigs.”

Administrative expenses reported an increase of 12% from $22.77 million for the first six months of 2017 to $25.62 million in the corresponding quarter of 2017. Management noted, “this increase was due to higher running cost at the new factory and servicing our loan.”

Consequently, SRA recorded operating loss for the period of $5.35 million relative to operating profit of $9.48 million booked for the prior year.

SRA noted, “we are confident that the third quarter, often as the ham season, and which also includes the start of the winter tourist season will be better as it historically the best period for pork sales. Concurrently, our entry in the hotel markets is also expected to significantly increase our sales. With the winter tourist season running from December to May the fourth quarter will also benefit from this spike in demand.”

While we are expecting come revenue growth recovery in the third and fourth quarters we are also cognizant that must control costs while increasing output by improving inefficiencies at the plant. We have also begun discussion with some of our key farmers with the view of a collective purchasing of raw materials thus the benefit from economy of scale. The sharing of best practice and technology amongst farmers has begun and will be expanded moving forward. The overall objective is for us to control the cost of pork to the consumer making it more affordable.” 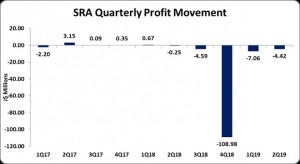