Sweet River Abattoir & Supplies Company Limited (SRA), for the three months ended June 30, 2018 reported revenue for the period which decreased by 16%, amounting to $77.06 million in 2018 relative to $91.75 million in the same of last year. According to the company, “This decrease was due to mainly the unavailability of pigs on the market; this shortfall in supply was however partially supplemented by revenue from slaughter service to third parties.”

Cost of sales declined by 8% from $75.46 million in 2017 to $69.59 million in 2018. As a result gross profit fell to $7.47 million, a 54% decrease when compared to $16.29 million for the same period of 2017. SRA noted, “This decline resulted in sourcing pigs at increased prices and selling price remaining constant based on pre-contracted arrangements.”

Consequently, SRA recorded operating loss for the period of $3.86 million relative to an operating profit of $5.10 million for the prior year.

Finance costs closed the period at $3.23 million, a 27% reduction when compared to $4.44 million for the corresponding period last year while finance income of $1,203 was recorded for quarter relative to nil in 2017.

The loss per share for the three month period amounted to $0.09 versus an earnings per share of $0.01 for the corresponding period last year. The twelve months trailing loss per share amounted $1.48. The number of shares used in this calculation was 81,531,043 units.

SRA noted, “Despite the negative results we were able to continue to meet the demands of our major markets. This we believe will provide for us a solid foundation on which to improve our future performance. During the period were also able to deepen our relationship in the tourism sector. This partnership has helped in inventory management resulting in inventories being held at acceptable levels. On another positive note, our slaughtering service continues to grow satisfied. We have expanded the service to include fabrication; packaging and short-term cold storage. Other players in the industry have expressed great interest in the added service and as the peak seasonal demand approaches we stand ready to serve that market. We remain confident in the quality of our products and anticipate that with the restructuring that we must of necessity make, the future looks promising.” 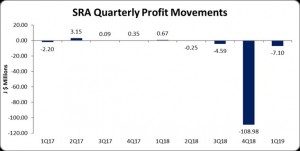