Revenue for the period decreased by 70%, amounting to $22.85 million in 2019 relative to $77.06 million in the same of last year. Management noted that, “this decrease was due to mainly the unavailability of pigs on the market; this shortfall in supply was however partially supplemented by revenue from slaughter service to third parties.”

SRA mentioned that, “our revenue for the quarter came from slaughtering fees and inventory sales. This is so as we have taken a temporary break from procuring pigs whilst we organize and recapitalize the business. We anticipate that, in short order we will to return to our core business of procurement of pigs and the sale of fresh cuts to processors, hotels, restaurants and wholesalers. It the latter that will ensure the company return to profitability and maximizes it true potential.”

Consequently, SRA recorded operating profit for the period of $302,736 relative to an operating loss of $3.86 million for the prior year.

Finance costs closed the period at $1.87 million, a 42% reduction when compared to $3.23 million for the corresponding period last year while finance income of $515,000 was recorded for quarter relative to $1.20 million in 2018.

The loss per share for the three month period amounted to $0.02 versus a loss per share of $0.09 for the corresponding period last year. The trailing twelve months loss per share amounted $0.28. The number of shares used in this calculation was 81,531,043 units. SRA closed the trading period at $2.75 as at September 19, 2019.

The Company stated that, “the importance of having a local facility such as ours cannot be over emphasized when one considers the reach of the plant over the past three (3) years. Over the period, over 20,000 pigs were purchased from over 400 farmers from 7 rural parishes. The economic benefit and the foreign exchange savings are significant not just for the farmers and their family but for the country.” 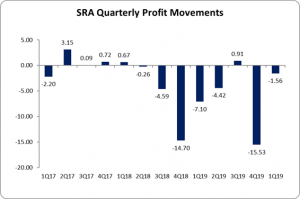