Sweet River Abattoir & Supplies Company Limited (SRA) for the nine months ended December 31, 2018: recorded a 17% decline in revenue to $198.51 million relative to $239.43 million in the same period in 2017.  Revenue for the quarter went down 14% to close at $63.94 million relative to $73.98 million. SRA indicated, “this decrease was due to the company’s  inability to procure pigs from farmers based on its indebtedness to farmers and their unwillingness to continue to supply.”

According to SRA, “the pig industry remains a viable business option in Jamaica as there is a potential market of over 7.0 million to include Jamaicans and visitors to the island. The key stakeholders in the industry should work to prevent the cycle of gluts and shortages thus making their businesses more sustainable.”

Administrative expenses reported an increase of 17% from $34.38 million for the nine months ended December 31, 2017 to $40.38 million in the corresponding quarter of 2018. The movement was due to, “higher operating cost at the factory and debt servicing.”

As a result, SRA recorded a net loss of $12.39 million for the nine months ended December 31, 2018 relative to a loss of $4.17 in 2017. The company booked a loss for the quarter of $912,882 million relative to losses of $4.59 million for the comparable quarter in 2017. Management noted, “such performance signals a turnaround after several months of losses during the financial year and come at the start of the winter tourist season as well as the biggest local public holiday a period of celebration described as the “ham season”. The winter tourist season which runs from December to April and more positive performances are expected for the period.”

SRA noted, “the highlights for the quarter are the continued growth of our slaughtering services as well as the maintenance of our primary markets. All of our customers as well as the end  users are  very pleased with the quality of the products leaving our plant. Our task therefore, is to increase efficiency and productivity while growing our market shares to remain viable. The transitional process has begun and will take about three to six months to be completed.” 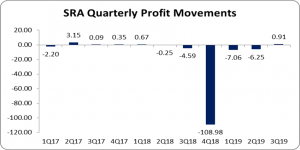