For the year ended March 31, 2017, Sweet River Abattoir & Supplies Company Limited (SRA) recorded a 60% increase in revenues to $345.25 million compared to the $215.15 million reported in 2016. Revenue for the fourth quarter amounted to $88.15 million compared to $55.87 million in 2016. The Company comments that the, “The company generated sales revenues in the Fourth quarter of 2017 in the amount of $88.2 million when compared to $55.9 million of the previous year; an increase of $32 million or 58% This increase was due to us expanding our market share.” SRA further noted, “not included in the increase mentioned above we have offered slaughtering service that accounts for an additional 30% of the volume over the ten months we are operating at the new plant. Our customers are delighted with the quality of the carcasses supplied so far and have reported increased yield and have increase their level of production.”
Cost of Sales climbed 52% to $296.15 million (2016: $194.69 million), while gross profit increased 140% to $49.10 million (2016: $20.46 million). Notably, gross profit for the fourth quarter surged to $15.36 million compared to a loss of $902 booked for the comparable period in 2016. SRA noted, “having identified our core group of farmers the supply of pigs is expected to be maintained and increase where necessary as our effort to increase our markets shares intensified. Our farmers will then be able to operate at full capacity thus maximizing their profitability with and through increase productivity and economy of scale’ Efforts are made to have them exposed to the latest technology and contacts have been made to explore overseas training.”

Administrative Expenses increased to $35.31 million, reflecting a 46% growth year over year from $24.18 million in 2016. The Company reports that the, “increase was as a result of our cost in Factory; trucking, administrative as we had to employ additional staff to ensure that we adequately staff the new plant. We also incurred some spoilage which further erodes our profitability.” Consequently, Operating Profit for the year ended March 31, 2017 improved by $17.51 million relative to an operating loss of $3.72 million book the prior year.”

The Company incurred Finance Costs amounting to $12.03 million relative to $3.60 million in 2016. SRA highlighted, “we are still working to find a more cost effective way of accessing working capital funding to move the new plant forward while we fine tune our operation.” No taxes were booked for the period, as a result, Net Profit amounted to $1.76 million, compared to a Net Loss of $5.53 million reported for the prior financial year. Profit for the quarter amounted to $719,310.

SRA outlined, “We are in dialogue to have in place a marketing contract with all our markets thus ensuring a continuous flow from the farm to the fork. These contracts will guarantee that we maintain viable production levels on the farms, at the abattoir and to our customers These contracts will run for periods of sir months, one year and three to five years depending on the nature of the business. Our marketing efforts will not be limited to the domestic market as we are working on getting all the necessary certification for export.” “We are expecting even better results in 2018 and beyond as we continue to improve in all areas of productions. Cost shaving in utilities, haulage and productivity will be given high priority in the weeks, months and years to come’ We remain committed to honour all the projects that were mentioned in our prospectus in 2014,these includes but not limited to: the slaughtering of sheep and goats, increase in the local market shares and export.” 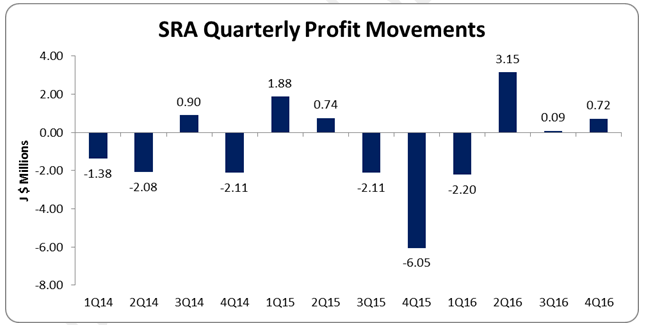 Disclaimer:
Analyst Certification -This research report is for information purposes only and should not be construed as a recommendation. Each research analyst (s) also certify that no part of their compensation was, is, or will be, directly or indirectly, related to the specific recommendation (s) or view (s) expressed by that research analyst in this research report.
Company Disclosure -The information contained herein has been obtained from sources believed to be reliable, however its accuracy and completeness cannot be guaranteed. You are hereby notified that any disclosure, copying, distribution or taking any action in reliance on the contents of this information is strictly prohibited and may be unlawful. Mayberry may effect transactions or have positions in securities mentioned herein. In addition, employees of Mayberry may have positions and effect transactions in the securities mentioned herein.