SSL Venture Capital Jamaica Limited (SSLVC), for the nine months ended March 31, 2021, reported revenues of $19.33 million versus $112.02 million reported in the prior year’s corresponding period. While for the quarter, SSLVC reported $13,122 (2020: $16.72 million) in revenue. SSLVC noted, “the 2020 revenue figures included $53.1M relating to Blue Dot Data Intelligence, a portfolio company for which our stake was sold in March 2020. With the closure of Bar Central Limited, the last remaining active portfolio company at the end of December 2020.” 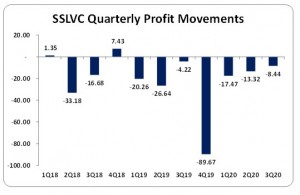