Notably, TTECH stated, “The company adopted IFRS 16, Leases as at 1 January 2019. The lease involved is the lease of the office building on Harbour Street. The accounting treatment is described in notes 2(b) and 10 in the audited financial statements. Under the new standard, the company is required to treat the lease as a ‘right of use’ asset which is depreciated over the life of the lease, and also treat the matching outstanding future lease commitments as a liability on which interest is charged.” The Company further added, “the lease liability is amortised the annual interest expense on the liability will fall and by 2025 the charges for interest expense and depreciation of right of use asset will fall below the cash rental charges forecasted to be paid.” 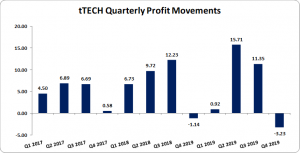