Consequently, Net Profit for the nine months was reported at $28.68 million, 59% more than that of the prior year’s corresponding period of $18.07 million. Notably, net profit for the second quarter also advanced by 83% from $6.69 million booked for the third quarter of 2017 to $12.23 million.

Management indicated, “During the quarter the company saw increased business in most of our major service categories. tTech continued to engage, educate and challenge IT Leadership from across Jamaica in our quarterly CIO forum called tTech Insights.” “IT Security Services continue to grow in line with our strategic intent to support clients, as the local regulatory environment matures with the imminent Data Protection Act. This quarter our focus was the delivery of Security Governance services with major clients specifically: Security Awareness training targeted to staff, executives and Boards, IT and Security Policy development and Support for Data Discovery and Classification.” 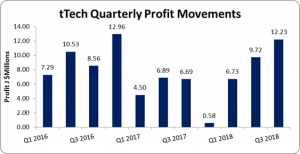