U.S. Goods and Services Deficit was $43.1 billion in November

The U.S. Bureau of Economic Analysis indicated that, “the goods and services deficit was $43.1 billion in November, down $3.9 billion from $46.9 billion in October.” 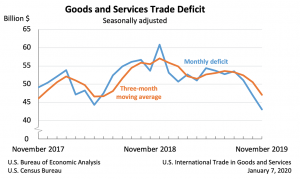 As for imports of goods; capital goods, consumer goods, other goods and industrial supplies and materials, all fell $1.2 billion, $1.0 billion, $0.8 billion and $0.6 billion repectively, whereas, automotive vehicles, parts, and engines climbed $1.1 billion. However, imports of services increased by $0.4 billion.